Time to switch gears as we head into the wonderful world of melodrama. 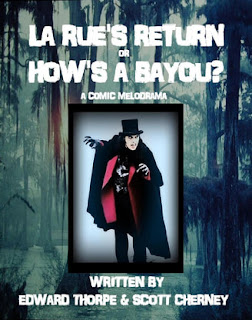 Evil always returns...
only this time, it has a bad French accent!

Oh, he's back alright. Jacques La Rue, that is. He's the villain in the very first theatrical venture show written by Edward Thorpe and myself. a little melodrama called LA RUE'S RETURN or HOW'S A BAYOU?.

Read more »
- May 21, 2022 No comments:
Email ThisBlogThis!Share to TwitterShare to FacebookShare to Pinterest 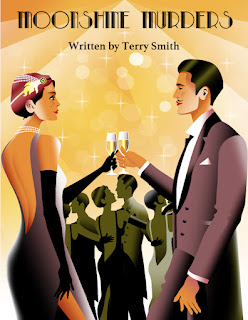 Opening up the MMM catalog to the interactive murder mystery script MOONSHINE MURDERS, one of three available written by the very prolific Terry Smith.
And what, pray tell, is the story of MOONSHINE MURDERS? Let the playwright tell you in his own words.

"The roaring 20’s, a speakeasy and mobsters….what do they all have in common? MURDER! Speakeasy owner Snowy Fox provides quality entertainment, inexpensive booze and a party atmosphere without the interference of the police….until tonight. Enjoy as police, mobsters, entertainers and high-brow society quests try to prevent a mob war right in the middle of the speakeasy."

Amid all the mobsters, moonshine and murder, they are also three musical numbers contained within MOONSHINE MURDERS just to add to the merriment on hand. 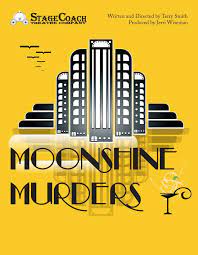 Terry's show has had two productions, originating with the StageCoach Theater Company in Virginia and has been adapted for high school students at The Grove Theatre, also in Virginia.

Royalties are $40 per performance. Script fees are completely waived so theater groups may copy as many as they require from a PDF after a signed contract.

For more info and to receive a FREE perusal script, contact me at writtenbysc@gmail.com 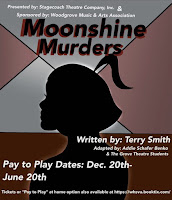 The Case of the Mysterious Cravat

I became a playwright representative or agent when I was first contacted by a fellow playwright, one Michael K. Young, who had his interactive murder mystery script produced by the same theater one of mine was staged-StageCoach Theatre Company in Virginia. As it turned out, Mike also co-starred in my show DEAD TUESDAY, so a connection had been formed long before we met. He sent me his script entitled THE CASE OF THE MYSTERIOUS CRAVAT and, after reading it, I agreed to shepherd his way to fame and fortune. (I still owe him both, but not for lack of trying)

THE CASE OF THE MYSTERIOUS CRAVAT (An Inspector Giles Murder Mystery) is a play within a play. During the production of CRAVAT in which the intrepid Inspector Giles of the sub-title attempts to solve a murder during a lavish dinner party at a palatial English estate, one of the cast members is also slain. Now there are two murders to solve, but  the show must go on because, after all, that's showbiz! Mike came up with some great character names like Lord and Lady Bottomton, Murray DeMorte, Dame Dee Ceased and, my favorite, the French maid known as Fifi LaWowow. It's a funny, clever script, perfect for both professional and community theater groups alike, especially those with dinner theater venues. 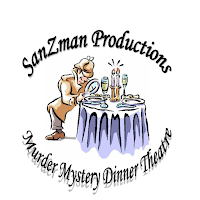 CRAVAT has had three productions thus far, at the aforementioned StageCoach Theatre Co. as well as The Rogue Theater in Sturgeon Bay, Wisconsin and this last Christmas with SanZman Productions in Los Angeles.

Performnce rights for Michael K. Young's THE CASE OF THE MYSTERIOUS CRAVAT are available for both professional and amateur theater productions including community groups, dinner shows, fundraising events, high school and college drama departments.  Royalties are $40 per performance. Script fees are completely waived so theater groups may copy as many as they require from a PDF after a signed contract.

For more info and to receive a FREE perusal script, contact me at writtenbysc@gmail.com
CLICK HERE TO READ AN EXTENDED EXCERPT FROM THE SCRIPT
- May 05, 2022 No comments:
Email ThisBlogThis!Share to TwitterShare to FacebookShare to Pinterest
Labels: interactive murder mysteries, Michael K. Young, play scripts, Rogue Theater, SanZman Productions, StageCoach Theatre Group, The Case of the Mysterious Cravat 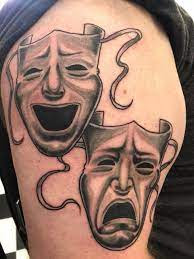 Good evening (morning, afternoon, time is relative) everybody out there in virtual land and welcome to a brand new site by me, Scott Cherney, author of the long-running (yes, still) SCOTT CHERNEY'S ETC. 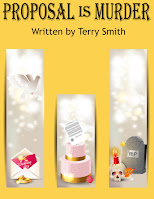 It's high time that I had a dedicated site for the plays I have been promoting forever and a day, those that I have written myself and others I am showcasing as a playwright representative-or agent, if you prefer-for (currently) two other writers- Mr. Michael K. Young and Mr. Terry Smith. These plays have been performed across the US of A from one coast to the other-East to West and vice versa and as far north as the Canadian border all the way down to where the stars at night are big and bright (clap clap clap clap) deep in the heart of Texas. The plays I will be referring to are of specific nature, falling into the genres of interactive murder mysteries and melodramas, all under the banner of comedy.

For myself, I began my writing career co-authoring a melodrama with my best friend Edward Thorpe for a dinner theater in Stockton, California that produced melodrama and vaudeville shows. The Palace Showboat Dinner Theater at Pollardville was a great training ground for me, allowing me to write two other melodramas as well as a half-dozen vaudeville shows which I also directed. While my shows got a handful of productions early on, it wasn't until the Internet came along and sent me on my merry way to sort of fame and nowhere near fortune, but far more successful for which I am very grateful. As far as the murder mysteries go, I sort of fell into them face first. I was soliciting one of my melodramas to a theater group in Nashville called-ironically called Mel O'Drama Theater. Little did I know that they specialized in murder mysteries. However, the producer, Melanie Roady (she being the Mel of Mel O'Drama) asked if I would like to try my hand at penning one of her shows. Son of a gun, I done did it and thanks to Mel, I had a new avenue to pursue. 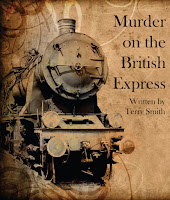 After a few years of promoting my plays here, there and everywhere, I was contacted by both Mike Young and Terry Smith, asking if I could try my hand at marketing their plays as well, both writers in the murder mystery biz as well.

Interspersed within this here post are the various scripts in our catalog. Among them are: 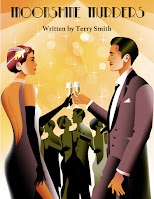 Michael K. Young's murder mystery THE CASE OF THE MYSTERIOUS CRAVAT, Terry Smith's MOONSHINE MURDERS, PROPOSAL IS MURDER and MURDER ON THE BRITSH EXPRESS EXPRESS and my two murder mysteries DEAD TUESDAY and MURDER-THE FINAL FRONTIER as well as the melodramas LA RUES' RETURN (co-authored w/Edward Thorpe), SONG OF THE CANYON KID, LEGEND OF THE ROGUE and ROXANNE OF THE ISLANDS.
The posts that follow will focus more on the individual titles that are available. But for now, I will give you the basics. Performance rights are available for both professional and amateur theater productions including community groups, dinner shows, fundraising events, high school and college drama departments. Further information about these titles including obtaining perusal scripts may be directed to me at:
writtenbysc@gmail.com 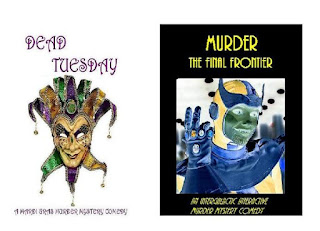 Time to switch gears as we head into the wonderful world of melodrama. Evil always returns... only this time, it has a bad French accent! F...